The artist duo Karl & Carl (Karl Hedin and Björn Carl Perborg) offers a generous mix of animation, sculpture, video and photography. Bizarre and uncanny situations occur as the searchlight is directed towards human beings and their relationship to the planet, the universe, life and death.

»Still No Response From The Void« (»Ännu inget svar från tystnaden«) is the title of Karl & Carl’s sincere and surprisingly accessible exhibition. On a jumpy road from science fiction to broken hearts, the artists navigate through the wetlands of poetry in a dialogue, where misunderstandings bring about unexpected meanings and where new connections constantly appear.

– It’s important to stay close to the limits of your understanding of the existence. That’s where we try to go in all our works, Karl & Carl explains. The exhibition is a tribute to the pointless, the ridiculous, the pathetic and the ungraspable. It also pays tribute to the cosmic distances. Between people. (Before this distance was measured to 1,5 metres).

A cabinet of grief with a coffin (or is it a spaceship?), images from crematoria and a video where people queue to throw themselves off a balcony, is combined with a pulpit, where a curator recites empty phrases collected from the curatorial statements of international biennials.

The artist duo Karl & Carl (Karl Hedin and Björn Carl Perborg) offers a fascinating mix of animation, sculpture, video and photography. Bizarre and uncanny situations occur as the searchlight is directed towards human beings and their relationship to the planet, the universe, life and death.

»Terminus« (»Ändhållplats«) is the title of Karl & Carl’s thought provoking and surprisingly accessible exhibition. On a jumpy road from science fiction to broken hearts, the artists navigate through the wetlands of poetry in a dialogue, where misunderstandings bring about unexpected meanings and where new connections constantly appear.

Terminus may refer to the last stop of a train line or bus route. Perhaps it is a crowded railway station where you can buy yourself a newspaper and change trains. Perhaps it is a desolate non-place on the outskirts of an industrial area, where the bus, after a five minute break, turns around to serve the same route once again.

Terminus may also be used in a figurative sense, indicating the final destination of a train of thought, an ideology, a political or artistic movement, a civilisation or the life of a human being. We may for example discuss the »terminus of nihilism« or, in an obituary, mention that someone, »after a period of illness, has reached the terminus of life«.

But the end can also be a beginning. Roger Penrose, recent Nobel Prize winner in Physics, suggests that our Big Bang is just one in a row of many. In the remote future, when the universe has expanded infinitely and time has ceased to exist, we will have massless Physics. A world, dominated by massless Physics doesn’t know if it is big och small. Thus, the remote future becomes the Big Bang of a subsequent eon.

Man, half ape, half cosmic intelligence, is approaching the terminus of his own self-understanding. The current geological age, the Anthropocene, is named after himself. Wherever human beings arrive, biodiversity declines. Most of the megafauna that once dwelt on Earth was wiped out by human beings already during the Stone Age. What do you do when you discover that you are a vermin yourself?

The exhibition »Terminus« directs the searchlight towards human beings (these walking digestive systems with exceptionally high thoughts of themselves) and their relationship to the planet, the universe, life and death.

During a compulsory information meeting for unemployed people, the friendly face of a ridiculous, Kafkaesque bureaucracy exposes the truth behind unemployment. (Unemployed people act as a deterrent to the rest of the population: to remain in their poorly paid jobs and to continue consuming).

The bored Job Centre coach explains the NAIRU model. NAIRU is the level of unemployment that is necessary in order to keep the inflation from rising. For this to be efficient, it is of uttermost importance for the unemployed people to feel bad.

If you are to do everything that is recommended, for example sleep eight hours every night, cook your own food and actively choose your funds, there is a deficit of 1 hour and 11 minutes every day. And this is even before you’ve started working 8 hours a day five days a week. This film explores why there is never enough time for those things most of us consider important, like work, school or love and family life.

Year: 2017
Duration: 3.03 min
Cast: Björn Perborg
The calculation that is the base for the film was done in collaboration with Frans Einarsson and has previously been published on the web site of Cuisine Bizarre: cuisinebizarre.se.

What makes the Canadian embassy sponsor a film festival in Hessen, Germany? After having encountered the same mystery year after year, Frans and Björn decides to investigate the case further. Behind the curtain, they find a chain of astonishing and farfetched conspiracies.

»Photos and films left behind by the now forgotten portrait artist Bror Kronstrand form the basis for a rumination on how posterity will remember us, and about the conditions of the artist then and now. Entertaining, well done and thought-provoking«. Sara Wadell, GIFF.

Photographic images come into the field of vision with a typical mechanical »clack« of a slide projector. Soberly but with a touch of admiration, an off-camera voice explains what happened at the airport on the way from Copenhagen to America.

Long story short: a small package of laundry detergent, a three centimetre pocketknife and a book on Islam caused such an uproar with the airport security personnel that the trip could only be continued after a long inspection.

A thorough reflection upon what it takes to survive as an artist in general and as a video artist in particular. In a very personal and pedagogical way this video sorts out once and for all how to make money as a video artist. It punctuates prejudices using calculation examples from the author’s own art practice.

Procrastination is a pretty universal phenomenon. The possibility of instant satisfaction often appears far more attractive than some vague reward in the future. That is why many of us suddenly start to do the dishes, vacuum clean or tidy up the flat when we really should be preparing for an approaching deadline. In this film the artist Björn Perborg reveals how his plans for a two month residency in Copenhagen turned into something else and how he, in the end, had produced nothing but a short film about procrastination.

It is the warmest winter in 250 years. In Stockholm all men have new scarves. For some reason they are all the same. They are even tied the same way.

When I went to school we were taught that Mont Blanc was the tallest mountain in Europe. Well, it isn’t any longer.

It is not often you see dead people these days. I have seen only three in my life. One of them was Lenin.

A two-minute fascination for the tramlines and especially the yellow maintenance vehicles that appear after dusk.

It is late on election night 2014. The Alliance, with the new Labour Party in the lead, has prevailed for the third time in a row. In an interview new Labour Party chairman, comrade Fredrik Reinfeldt, reveals why he wants to reinstate slavery in Sweden. The work-actual meanings are drawn to a head when the final solution for welfare dependency is launched.

Hilo mental, or Mental Floss, is a short stop motion animation that shows a ritual for mental hygiene. As the tolerances for what is accepted within the term normality are shrinking Mental Floss proposes yet another ironical self-help cure, and as such, there is of course a product involved, that can be bought and sold. Hilo Mental relates to the absurd fact that psychic ill-health is increasing side by side with economical growth.

Continuous camera movement circling a table. Gloved hands add round marks on aerial photographs and drawings. Maybe they are preparing a terrorist attack. All objects seen are high-end designer objects.

Echoing through time the words from a speech originally held in 1775 with depth of panoptical dimensions. Barricades of artificial control mechanisms are installed to protect us from our selves – the ever expanding distance between us.Rancorous Call consists of imagery of surveillance cameras arranged in a symphony to Sir Patrick Henry’s words uttered at St John’s Church in Richmond, USA, and here interpreted by Richard Schumann.

Collaboration with Anna Viola Hallberg. Completely based on found footages and sound collected from the Internet.

Two channel animation. One monitor shows a man grating his genitals on a grater before eating them. He immediately grows new genitals that he grates and eats over and over again. The other monitor shows the tools that he has been using. They are washed and everything seems to be completely normal.

Based on a true story. Swedish Migration Board sends a letter to an individual asylum seeker, instructing him to meet with his case officer to discuss an apprenticeship. Actually it’s a trap and the police are waiting. The asylum seeker is arrested and deported from the country. He then »disappears«.

n the style of a children’s television program, the making of the world’s most expensive perfume, Carambole, with the irresistible fragrance of a new born babies, is revealed.

Immigrant Song is a two-channel video installation. On the first screen a drummer unpacks a typical drummer’s stick bag, filled with firework rockets, and plays a variation of John Bonham’s drum groove from Led Zeppelin’s »Immigrant Song« using firework rockets as drumsticks.  On the other screen fireworks over a night sky go off in synchronisation with the drumbeats from the first screen.

A video monitor on the pillow of a bed shows a grown up man in a 1:1 scale, sleeping and thumb-sucking. The blankets in the video and in the room are the same.

Semi-curved construction with theatrical props, light sign and velvet cloth. Inside visitors can see a video recording from theatre Boudoir Intime in Falkenberg. Actors use real newspaper and magazine articles for script. All articles have the same content: three men discussing male vanity, ideals and relations. The articles speak in a didactic tone. Target group is young women presumably wanting to know how men think and what makes them tick.

The most unpleasant PowerPoint presentation in the world. Microsoft Clipart images illustrate »the new thoughts«, outlining the transfer of social responsibilities from society to single individuals. We call it »blame shifting«. Concept developed in collaboration with Karin Fransson, Lina Gillefalk and Kjell Vänerbo.

In the pilot, »Cross over«, television chefs Frans and Björn cook a three course dinner: shrimps, dill cooked in red wine and served with white beans in tomato sauce, Swedish Falukorv sausage baked with walnuts and eggs flambé in cognac served with whipped cream. The kitchen is very messy and unclean. All over the place you see cook books, tooth brushes, a human skull and artists material – adding character to the already fashionably grimy environment. As a viewer you see creative cooking in the act but can also recognise something of your own attempts at domestic gastronomy.

A men steps into a dryer. The door is closed and the machine starts running. After a while the man comes out, with a reddish tan on his back.

Two men wearing post-surgery dog funnels crawl on a stage to the cheers, whistling and applauses from the audience. 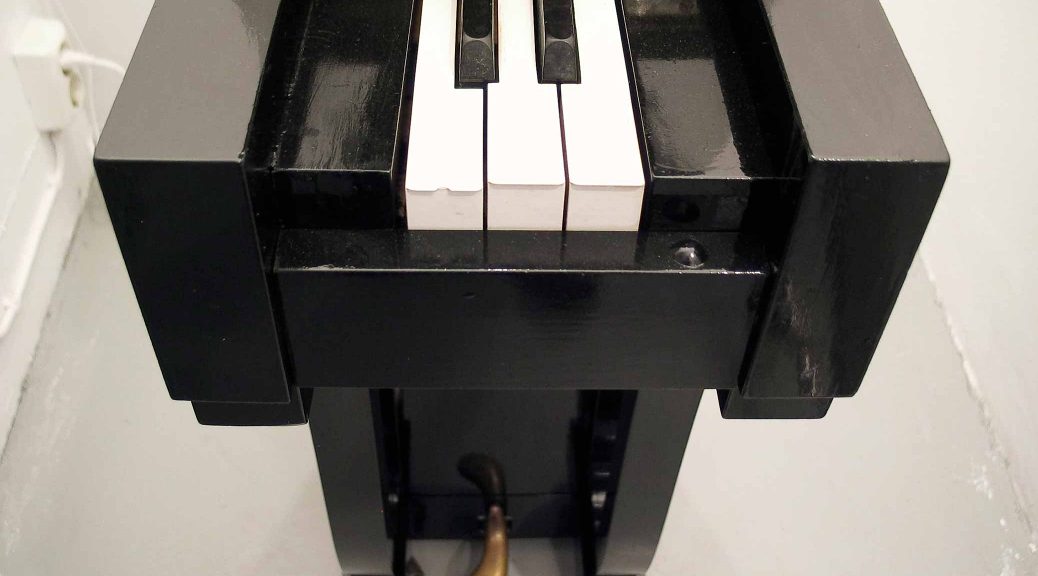 The nesting box is a slightly oversized wooden nesting box with a video monitor and a speaker inside. The video monitor shows a man crying. Already from a distance you can hear the soft sound of crying that might also resemble birds’ twittering. The man cries, apparently without ever stopping – even sadder than that Dutch guy who disappeared from a sailing boat.